“What does that sign mean,” I asked our guide between huffs and puffs. The sweat dripped off my forehead and stung my eyes. The wooden green-and-white sign was posted in intricate Nepali script on the side of the trail where I was currently struggling. We had tackled about 750 feet of Pokhara’s Anadu Hill on our way to Shanti Stupa, one of the world’s 80 peace pagodas.

Pokhara ranges between 2,713 feet and 5,710 feet in elevation. It is Nepal’s second largest city and is a short 30-minute plane flight from Kathmandu. (Our plane ride was taken via an airline named “Yeti,” appropriately. Our hopelessly spry flight attendant darted up and down the aisles — first with cotton balls [for the ears], then with hard candies. She raced to hand out peanuts and pour us each a glass of water before we touched down in the Pokhara Valley.)

The contrast between Pokhara and Kathmandu was stunning: The resort-like town of Pokhara had a lighter, less chaotic feel than that of Nepal’s capital city. I welcomed the reprieve from the Kathmandu Valley’s dust situation, which seemed to permeate everywhere and everything. Pokhara’s days were warm, bright and sunny. Paragliders with colorful chutes bounded off the sides of the cliffs, and then floated peacefully down toward Fewa Lake. Colorful canoes cut across the water and took loads of tourists to the Tal Barai Temple, which was located on a tiny island in the middle of the lake.

Pokhara Valley was picturesque: The city looked up to sharply ascending emerald-green mountains. (Nepali call them “hills.” I noted that their “hills” are the size of the Rockies.)

“It says, ‘Be friendly to foreigners,’” he said. I was taken slightly aback. From what I had seen, being friendly to foreigners seemed like second nature to the Nepali people. Everywhere we went during this 10-day trip, we were met with smiles, hot, sweet milk tea (masala tea with loads of sugar and hot milk) and cookies. I enthusiastically accepted both…and more, if offered, given how much walking was occurring on a daily basis.

On this particular day, I had registered over 17,770 steps and 80-something stories. (Upon learning this, I promptly tore open another sleeve of cookies and attacked it. Think Cookie Monster; not a fine moment.) The trek up was mostly stairs, anathemas that I tended to avoid whenever possible, opting for elevators instead. I shuffled along slowly, occasionally stopping to sit on the edge of a cliff to catch my breath — as well as to catch the stunning views of Pok 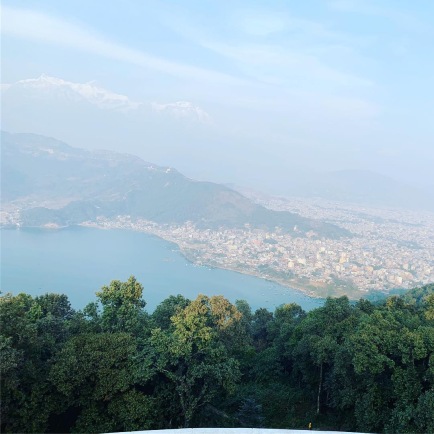 I was passed by Nepali families: men, women, children — even a grandmotherly lady who appeared to be well into her 70s. (She carried a walking stick, I noticed. Next time, I vowed, I would find a walking stick.)

“Namaste,” I heard, over and over.

All friendly, all welcoming. All, presumably, slightly amused at the American-who-was-clawing-her-way-to-the-top-of-the-hill-no-matter-what.

No, I didn’t think that any of the Nepali people I had encountered needed any reminders to be friendly to foreigners.

Americans? Now, Americans are another story. We need to be reminded of a lot of things: “Slow traffic, move right”; “Don’t drink and drive”; “Slow down, workers present”; “Employees, wash hands before returning to work,” lest our brains and our common sense fall out into a puddle on the floor and we forget.  Americans — many of whom are lulled into complacency by social media and the ease of their everyday lives — need to be reminded to be friendly and considerate, as if decency doesn’t even come naturally anymore.

The default emotion now seems to be “OUTRAGE.” We are OUTRAGED when someone cuts us off in traffic, merges into our lane, looks at us wrong, slights us. We shake our fist; the middle finger flies up. Yet, when compared to much of the world, our lives are ridiculously easy.  This was my number-one takeaway from my trip to Nepal: We have it so, so easy compared with the rest of the world. We are OUTRAGED by things that don’t matter — little things, really.

I was surrounded by natural beauty everywhere in Nepal; the view from the top of the World Peace Pagoda was stunning. I climbed the stairs to circle the pagoda, which featured four statues of the Buddha in shimmering gold. It was late afternoon. As the sun went down, it would become chilly, even cold.

I started back down the steps that were carved into the side of Anadu Hill, down the hill toward Fewa Lake. We returned to our colorful canoes, and then to lakeside Pokhara.

There, we would sit down with friends for daal bhat, milk tea and cookies.

One thought on “Be Friendly to Foreigners”

Welcome!  My name is Mary Ann: I am a writer, editor, and student.  I love my husband, my dogs, my kids, Jesus, and spaghetti with meatballs. Not necessarily in that order.