The novel is set in the late 1800s and features young Sara Crewe, who is sent to attend an exclusive boarding school in London. On one of her father’s adventures, however, he dies. Now an orphan, Sara is suddenly the responsibility of the school’s bitter headmistress, Miss Minchin. The charity case and servant, as far as Miss Minchin is concerned, is consigned to a sparse attic room and is forced to work for her keep.

Photo taken from the Prague Castle. The middle rooftop with the light on is our attic Airbnb bedroom.

The attic bedroom of our Prague Airbnb brought back memories of the attic bedroom that was described in A Little Princess. Its north-facing window opened up to a world of red rooftops and a lighted view of the famous Prague castle.

“You can see all sorts of things you can’t see downstairs,” Sara said in A Little Princess. “Chimneys—quite close to us—with smoke curling up in wreaths and clouds and going up into the sky…it all feels as high up—as if it was another world.”

The rental was in a very old building.  It was located on the very top floor of a multi-floor walkup; the bedroom was perched at the top of a narrow set of creaky wooden stairs in what, at one time, had been the attic.

Our Prague flat was nestled just south of the Prague Castle, on the downward slope that led toward the Vltava river. About 90% of the apartment had been updated; the only space in the apartment that didn’t appear touched was its unheated entry mud room space, which consisted of rustic wooden walls and brick floors. A two-stair entryway led to the cozy kitchen. Throughout the entire space, the ceilings were low and slanted, reminding us just how close we were to the rooftop. 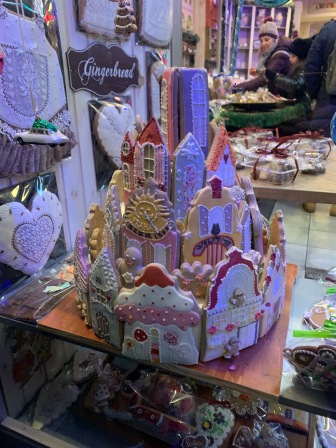 The world outside our temporary home was decorated for Christmas. An artisanal gingerbread cookie store across the street of the building’s entrance begged us to come, see, taste and featured window displays that could only be described as magical. A hike up the hill led us to the gothic Prague Castle. Its construction began in 870 A.D.; it is the largest and oldest castle in the world and sits on 750,000 square feet.

Around the castle complex, vendors in temporary shops sold glühwein, art, Christmas decorations and warm treats. We bought mugs full of spiced wine from a father and a son from France. The mugs featured the father’s artwork. 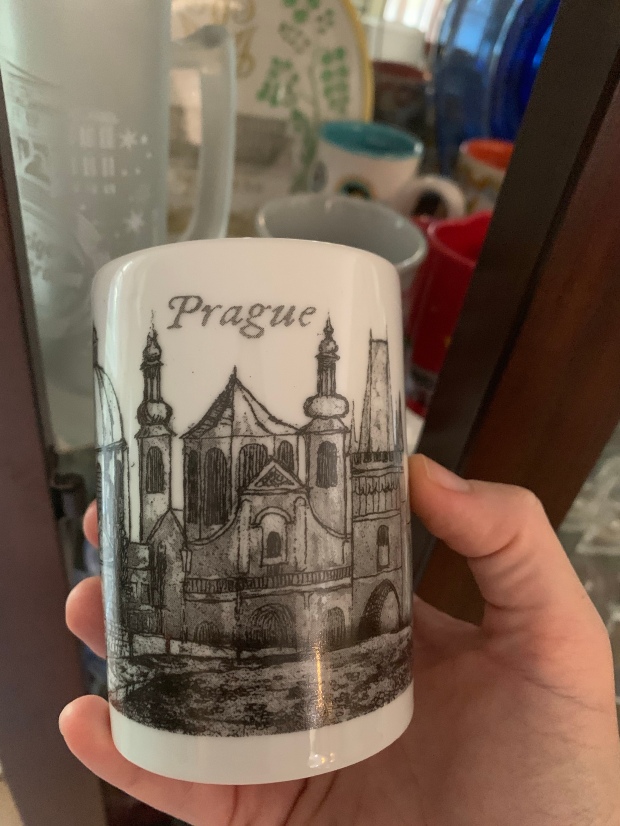 We continued down the hill, toward the Charles Bridge.

Warm white Christmas lights lit up the streets, Christmas decorations added to the magic and sweet smells wafted out from the coffee shops. My daughter begged us to try Prague’s famous trdlníks. These street desserts featured cone-shaped donut pastries that were filled with ice cream and achoice of toppings. My daughter chose a chocolate cinnamon donut filled with vanilla soft serve and drizzled with chocolate. Chris chose a donut filled whipped cream and strawberries. Neither one could finish their trdlník.

Beef goulash, bread, potatoes, dumplings: traditional Czech food beckoned us everywhere, promising comfort, heaviness and warmth. On this chilly night, however, we had filled up on sugar, ice cream and chocolate. We walked back to our Prague apartment.

Later that night, I woke up suddenly. Heavy footsteps were ascending the creaky stairs that led up to the attic. I thought it was my daughter; the ice cream dessert had proved too much for her and she went to bed on the couch in the downstairs family room with a bellyache.

“Margaret,” I called. No answer. “Margaret?”

The footsteps continued up the stairs. They entered the bedroom. They walked over to the bed. I pulled the blankets over my head as the footsteps, recognizing how cliché this move was.

I peeked out from under the blankets to an empty room. There was no one there. I moved closer to my husband.

I thought about this old building and about the buildings, and the history, that surrounded us. If a structure was going to be haunted, it would certainly be here.

Later that morning, we got up early: we had a city tour with a guide scheduled. Chris went for a morning run to the to the castle on the top of the hill and took a picture of our lighted flat below.

We set out that morning for a full day in this favorite, historic city. We stopped by a café for a strong cup of coffee. As we ate our breakfast, I thought how many stunning changes this city had seen; it was full of colorful stories and wonderful characters. Prague was wonder, beauty, brutality, death and innovation all rolled up into one.

This city, full of paradoxes and ghosts, will likely be standing long after we are gone.

Welcome!  My name is Mary Ann: I am a writer, editor, and student.  I love my husband, my dogs, my kids, Jesus, and spaghetti with meatballs. Not necessarily in that order.